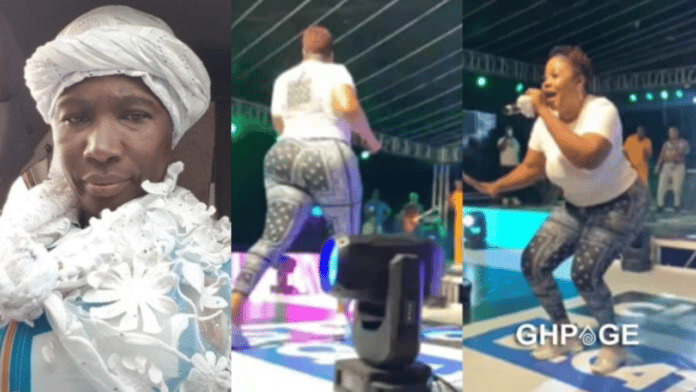 Renowned Ghanaian gospel singer and Evangelist, Cecilia Marfo, is the latest person to reprimand and descend on Empress Gifty for enhancing her butts and curves.

Over the weekends, Empress Gifty stormed Stonebwoy’s Ashaiman To The World concert in a very skimpy dress.

Wearing a white T-shirt and a pair of black and white leggings that accentuated her curves, Gifty Adorye gave fans more than what they paid to attend the show.

As seen in viral videos from the event, the gospel musician showcased her hourglass figure as she shook her buttocks in the body-hugging pants to excite her fans.

Cecilia Marfo who is very sad and disappointed about Empress Gifty’s latest slay queen lifestyle has called out her colleague industry person during an interview on BRYT TV.

According to Cecilia Marfo, Empress Gifty should consider the fact that she’ll one day get old and he beauty will fade away and her big artificial bortos won’t matter anymore.

She continued that the “3y3 Woa” hitmaker shouldn’t allow worldly things to cloud her conscience to behave like a non-Christian.

Cecilia Marfo additionally quizzed about the essence of a big bortos after 5 minutes of sex – Hence it’s common sense defying for people to spend thousands of cedis on enhancing their bodies.

Empress Gifty is slowly and gradually losing the real gospel aspect of her music. Many loved her because of the way she carried herself in gospel music both on stage and in videos.

But now, she is just getting carried away with the people she is surrounding herself with now, especially after she got married.