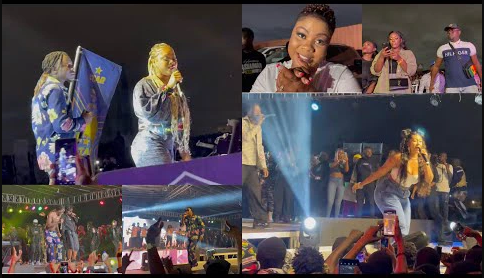 Ghanaian gospel musician, Empress Gifty Osei never seems to disappoint when it comes to stage performances as she was spotted in her usual energetic elements at Stonebwoy’s annual “Ashaiman To Da World” concert.

Stonebwoy’s 7th”Ashaiman To Da World” took place yesterday 3rd September 2022 at the Saka Saka Park in Ashaiman where Stonebwoy rose to fame while hustling on the street with his music talent.

A few days ago, he was spotted assisting the residents in Ashaiman to clean up their choked gutters ahead of the concert. This earned him the admirations of his fans on social media but a few people also lambasted him for only embarking on such clean-up projects only when his show is about to be staged in the Ashaiman community.

Well, the show happened yesterday as Stonebwoy together with some top-tier Ghanaian satsr thrilled the people pf Ashaiman with intimating and electrifying performances on the stage.

Empress Gifty, one of the best gospel singers in the music scene was also spotted thrilling the attendees of the concert with mind-blowing performances of some gospel tunes.

Mostly, gospel musicians are not expected to be performing at such concerts but Empress Gifty begs to differ as she has always been a lover of all kinds of music and supports anyone who calls on her for their shows.

Watch the video below: