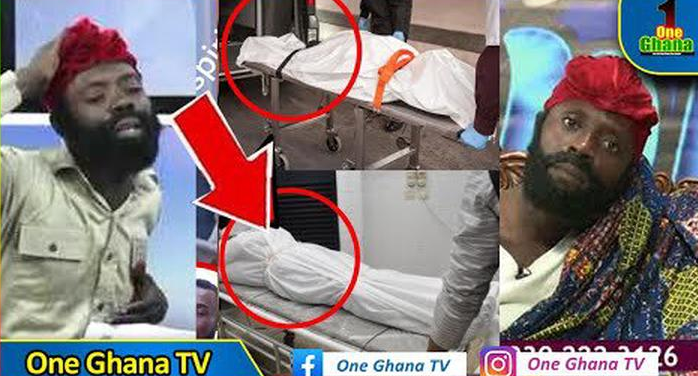 Comedian Kwaa Appiah has revealed that his late colleague Baba Spirit fell and hit his head.

He revealed this in an interview following the sad demise of Baba Spirit who recently recovered from 2 years of sickness.

According to Kwaa Appiah, Baba Spirit has been sick for 2 years but they decided not to bring it to the media.

Whenever he starts getting well and gets a gig, the sickness returns

Yesterday around 5p he received a call from Baba Spirit that he should come else he will die.

He asked what’s the problem but Baba Spirit couldn’t tell him the problem.

Appiah says he called the number several times but no one answered but later the number called and the girl who spoke said she mistakenly left the phone home when she was taking Baba Spirit to the hospital at Adjen Kotoku.

He rushed there but unfortunately Baba Spirit was no more.

In a recent interview by Baba Spirit at Power Fm after his return from hiatus, he talked about his mysterious sick,

He said doctors couldn’t find the kind of sickness and the root.

What made him almost take his own life was when he started having nightmares where he sees someone with knife attacking him.

In January 2022, he called Avram Moshe who gave him a number to call.

The man he called managed to heal him but he revealed how some people in the industry were responsible of the sickness.