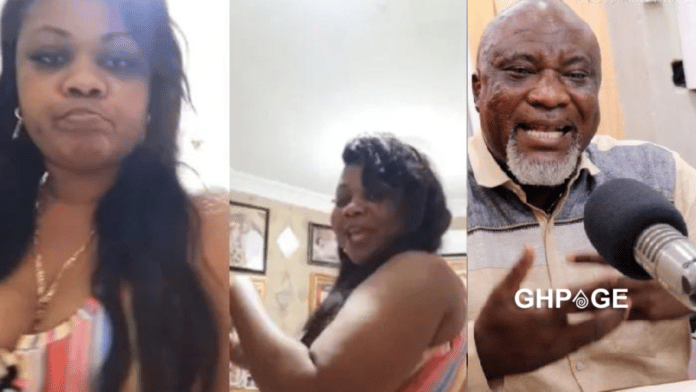 Last Friday, a video that landed on the internet gave a rather unfortunate account about how Empress Gifty allegedly gets drunk before coming live on her social media pages to rant.

Prior to this video, the gospel musician has been releasing a series of videos where she purposely flaunts her figure, although she claims to be advertising for brands.

In the latest video that has raised eyebrows, she was seen with Hennessy on her table whilst she danced seductively to capture the full attention of her fans.

Disappointed social media users who watched the video concluded that Empress Gifty has now turned into a drunkard.

The reason for her recent social media rants because she’s always under the influence of alcohol which gives her some sort of crazy confidence.

Amidst the brouhaha, Hopeson Adorye who is the wife of the gospel diva has come out to defend his wife and bash naive critics in the process

According to angry Hopeson Adorye, it is only uncivilised people who will link her wife to a drunkard just because a bottle of alcohol was seen in their house.

He angrily claimed that the alcoholic drink captured in the viral video is reserved for visitors who don’t like soft drinks hence Ghanaians should leave his wife alone.

I personally see nothing wrong even if Empress Gifty drinks behind the scenes because alcohol is the only thing that consoles us for the things we don’t have.