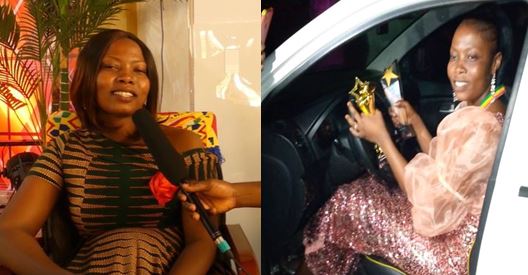 According to the gospel artist who is a member of the Buokrom-Sepe central assembly of the Church of Pentecost, FAST TV scammed her via their music awards organized by the TV station.

The awards scheme organized early this year had a KIA morning saloon car as the grand prize, for which Dora Ansah was crowned the winner but never got it after being sponsored by the church and spending thousands of Ghana Cedis.

Speaking to MAK TV in an interview, the musician revealed that the award was held on the 6th of March 2022. The grand prize of the award was a saloon car. The awards were dubbed ‘the Ministers’ Awards’.

“We were many, but God was so good that I was crowned the winner.

I won the car, sat in it, took pictures and all that. The whole show ended on a Sunday, so they told us to come to the office on Tuesday because that Monday of the week was a holiday. So on that Tuesday, when we got to the office, they didn’t give us the car,” she said.

Dora Ansah further noted that, after several attempts by herself and the Church of Pentecost to get the car, management of Fast TV began tossing them around.

“Today they will say this, the next day they will say another thing.” In the end, they asked me to pay GHC10, 000 before the car could be released to me. In fact, it became difficult for me because I could not raise such an amount and initially, they also didn’t tell us we would pay the extra money,” she revealed.

Dora Ansah hinted at the evidence available to back up his grievance, saying, “I have videos and pictures of the car.”

“I pray to God that, even if they wanted to scam me, he would change their minds so they would give it to me because I have spent a lot of money. I have to get it.” Poor Dora said it in the interview.