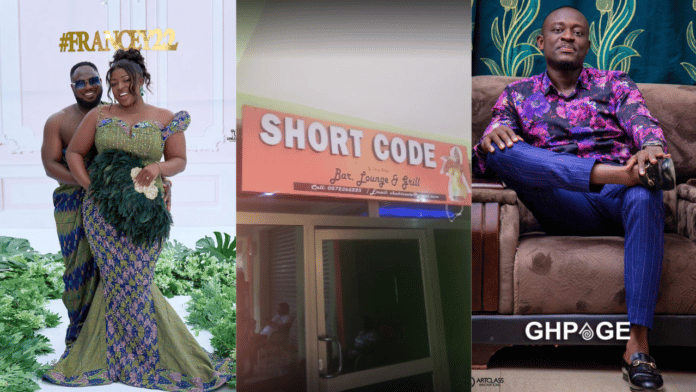 The food and entertainment joint named Shortcode By Tracey is a three-in-one pub comprising a lounge, bar, and grill.

Actually, the pub has been closed for some time now due to poor sales but news that went viral on the internet yesterday claimed that she sold the pub to finance her wedding.

According to notorious IG blogger Adwoa Tutugyagu who broke the fake news on her IG page, the pub was sold because Tracey needed urgent money to finance her colourful wedding with Mr Frank.

After Tutugyagu’s false reportage trended on the internet, other news blogs took the story and published it on their sites.

Alot of Tracey Boakye’s critics have since been having a field day because as we all know, a lot of Ghanaians jubilate over the downfall of others.

Amidst the rumours, the caretaker of Tracey Boakye’s shop who is overwhelmed with how the fake story has taken over social media trends has come out to firmly rubbish the reports that Tracey has sold her pub due to financial issues.

Speaking in an exclusive interview with Ghpage’s Abena Gold, Mr Philip who is the caretaker of Tracey Boakye’s restaurant dismissed the reports by categorically stating that there’s no way the actress can sell the shop because she’s just a renter.

Mr Philip additionally disclosed that Tracey Boakye hasn’t contacted him about the closure of her pub and besides, she even has more than two years’ rent advance so he got shocked after reading about the reports on social media.

As revealed by Mr Philip, Tracey Boakye decided to close her pub after she permanently moved to Accra – Making it difficult to keep track of the day-to-day activities of her business.

Listen to the interview below to know more…