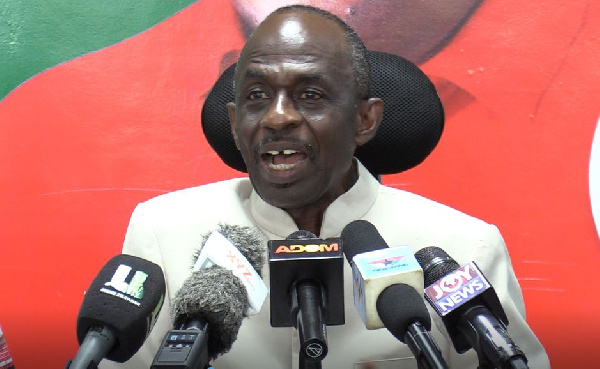 The opposition National Democratic Congress have cautioned the government to refrain from hiding behind SIM re-registration to perpetuate lawlessness and arbitrariness.

In a release signed by its General Secretary, Johnson Asiedu Nketia, it says the exercise, since its inception “has been fraught with chaos and arbitrariness occasioned by the incompetence of the Ministry of Communications and the National Communications Authority.”

The party says the re-registration has rendered “citizens incommunicado, helpless and frustrated.”

They are therefore calling on the Select Committee of Parliament on Communications to call the NCA to order on the “reckless SIM card restrictions.”

Read the full release below:

THE AKUFO-ADDO GOVERNMENT MUST STOP THE LAWLESSNESS AND ARBITRARINESS IN THE NAME OF SIM CARD RE-REGISTRATION.

The National Democratic Congress has observed with great concern the new wave of challenges that have bedeviled the ongoing mobile SIM re-registration exercise by the Akufo-Addo/Bawumia government. The party notes with utter dismay that right from the time this Government, through the Ministry of Communications decided to undertake a re-registration of mobile SIM cards of Ghanaians sometime in 2021, the exercise has been fraught with chaos and arbitrariness occasioned by the incompetence of the Ministry of Communications and the National Communications Authority.

We are appalled that this objectionable impunity has reached an alarming point where the mobile SIM cards of innocent Ghanaians including those who have already undertaken the said re-registration are being restricted, thereby rendering many of our citizens incommunicado, helpless and frustrated.

We hold the view, that this simple exercise of linking SIM Cards to the Ghana card of subscribers to check crime among others, could have been easily done by extracting the biometric data of persons who have registered for the Ghana card from the National Identification Authority and matching same with the database of the Telecos. The NIA has made this point, the NDC’s Minority Group in Parliament and Civil Society Organizations have backed same.

Yet, the obstinate Ursula Owusu and the NCA will just not listen to these voices of reason but have chosen to make a fetish of a simple exercise of linking SIM cards to Ghana cards, thereby subjecting Ghanaians to needless long queues, loss of valuable working hours and sleepless nights.

It is an indisputable fact that the re-registration of mobile SIM cards policy and its attendant sanctions that are being meted out to Ghanaians by the Ministry of Communications and the National Communications Authority are neither backed by the SIM Registration Regulations, 2011 (L.I 2006) nor the National Identity Register Regulations, 2012 (L.I 2111) or any law in force in the country. The decision by these entities to restrict the SIM Cards of Ghanaians including those who have already re-registered their SIM Cards is therefore unlawful, irresponsible and unacceptable to say the least.

The NDC condemns in no uncertain terms this arbitrariness and recklessness on the part of the Minister of Communications and the NCA. Such mishandling and crass bungling of a simple exercise such as the ongoing SIM card re-registration can only be supervised by incompetent and clueless public servants like we have at the helm of the Ministry of Communications and the NCA.

While we commend and encourage legal actions filed by citizens of the country who have been affected by the reckless SIM Card restrictions, we call on the Parliament of Ghana, particularly the Parliamentary Select Committee on Communications to call the Minister of Communications and the NCA to order in line with its oversight responsibility over these state entities. The lawlessness being displayed by the Minister of Communications, Ursula Owusu and the NCA must be halted now.